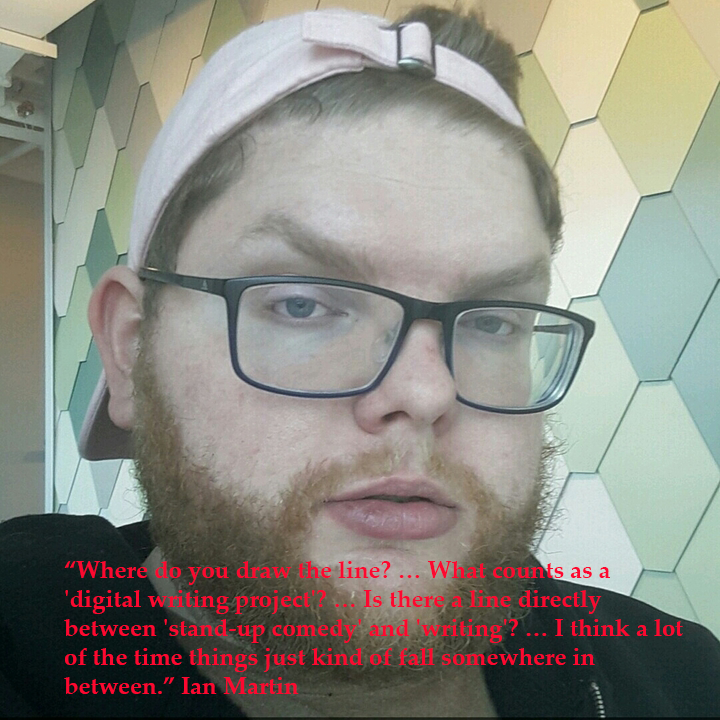 We talk about the anniversary of Ian’s chapbook, Climbing Out of Other People’s Hands (In/Words Press, 2016). We discuss the humour of Ian’s writing, comedy as a way of dealing with depressing subject matter, the zany fourth wall breaking comedy of Maria Bamford’s Lady Dynamite. Aaron asks about the boundary between performing poetry and stand up comedy. Amanda talks about the audience’s natural need to laugh at a reading. We coin the term “stand up poetry.” Ian talks about where we focus as the key factor.

Amanda asks about Ian’s inspiration to tie mythology and contemporary life together. Ian talks about the genesis of a poem from joke to workshopping it at the In/Words Writing Circle. He talks about taking lesser known figures in mythology and moving them into a modern context to give them a chance to express themselves, to be more than just bit characters in other people’s stories.

We discuss the comic book/fairy tale nature of Ian’s writing. Ian talks about how all the media he consumes influences his work. He’s interested in the framework of fairy tales, ordinary people thrust into magical situations, dark but also whimsical. Ian talks about one of his favourite graphic novels, Seconds by Bryan Lee O’Malley, which is structured as a fairy tale. It’s an amalgam: slice-of-life, fairy tale, comic book. Aaron asks about surrealism as an interest. We talk a bit about magic realism. None of us can remember the Isabelle Allende book that we’re all thinking of.

Amanda asks about how Ian decides to write poetry or prose. Ian finds that poems are about smaller scenes, are more immediate. Prose is for more than one scene with more background. Aaron talks about how poetry can be about a moment. Ian cites The Mezzanine by Nicholson Baker, which is about all of a man’s thoughts as he takes an escalator from the first floor to the mezzanine, as an example of a longer work that is about just one moment. Amanda mentions Ulysses. We talk about long poems and short prose. Amanda talks about character development as something that occurs more in fiction. Aaron talks of purists who say if you use sentence structure, it’s prose. Ian uses constraints more in poetry, such as line length, repetition, limitation of number of words. We discuss reading work out loud as a way of revision.

Amanda asks about reading work in public. Ian talks about being nervous initially to share work. Aaron talks about optimal anxiety. Amanda talks about her detachment when nervous. Amanda wonders about whether it surprised Ian when people laughed when he was reading his poetry. Ian finds that sometimes he says something dark and depressing and people laugh. Amanda finds that awkwardness can make people laugh.

Aaron asks about what digital writing allows Ian to do that print doesn’t, such as his on line chapbook, “You Are A Bad Person.” Ian talks about things like choose-your-own-adventure-interactive stories as another way to engage the reader. Ian talks about Oulipo, giving people tools to mash up the poems. Amanda mentions a poet named Douglas Luman whose site Applied Poetics plays around with Oulipian constraints. Ian mentions artificial intelligence as a way to make poems, bot work, Emily Daniels use of neural networks to create a poem. Ian mentions that the digital realm makes it accessible to people. He talks about a program called Twine as an easy coding development tool for those without a technical background. Print means you often have to go to others to have the work published whereas digitally you can just put things up wherever.

Amanda ends the interview with praise for Ian’s work.

Ian Martin: you are a bad person: http://ian-martin.net/projects/badperson/

The Mezzanine by Nicholas Baker:

Stay tuned for the next episode of The Small Machine Talks sometime in March with special guest, Natalie Hanna.

Thanks to Ian, Charles, our sound engineer, and Jennifer Pederson, our musical mistress of mayhem. Thanks especially to our listeners and social media reposters.