Episode 56: Solo Book Chat – Adele Barclay’s Renaissance Normcore and If I Were In A Cage I’d Reach Out For You 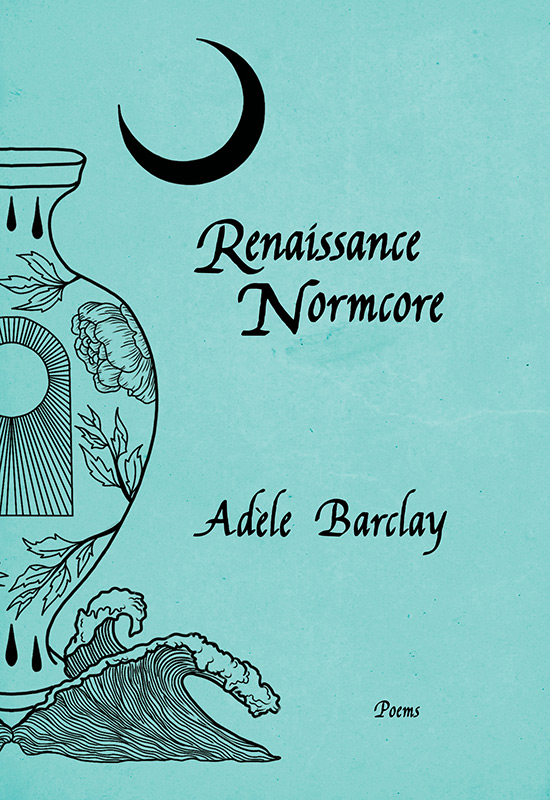 Episode 56: Adele Barclay’s Renaissance Normcore and If I Were In A Cage I’d Reach Out For You

Hello everyone and welcome to episode 56 of the Small Machine Talks. I’m Amanda Earl and I’m recording the episode solo today from my home. My co-host, a.m. kozak is not here because we’re all supposed to stay in our own homes these days.

If you’re a regular listener to the podcast, you may have noticed that Aaron and I have mentioned Adele Barclay a fair bit. We had the chance to meet her and hear her read from If I Were In A Cage I’d Reach Out To You at the Tree Reading Series in 2016.

When I heard Adele was coming to VERSeFest this year, I was excited and invited her to be on the podcast for an interview. Unfortunately, the festival, along with everything else, had to be cancelled. All being well, Adele will return to Ottawa, to the festival another time and we’ll have a chance to do the interview. In the meantime, I thought I’d share my thoughts on Renaissance Normcore.

You’ll notice that I’m reading prepared notes, for the most part. Doing the podcast alone is an odd experience. I always prepare but when I am not alone, it is a conversation as opposed to a monologue. I’ll try to add in some asides and I’ll likely stumble a bit. I’m not going to ask Charles to erase those stumbles. I hope it doesn’t make the listening arduous. This is an experiment. All being well, I won’t be podcasting alone again or if it’s something you don’t mind, perhaps I will. These days it’s all moment by moment.

I first wanted to talk about my practice of reading poetry as both a poetry fan and a writer of the stuff. As someone who enjoys reading poetry, I read for pleasure and interest. If as I’m reading, whether it’s an individual poem, a chapbook or a book, something resonates for me, I become curious and want to engage more deeply with the work. As a writer, I want to understand the craft, look at the metaphors, for example. So I’ll read through the book several times more and if I do that, I’ll usually write about it to share with others and I may even reach out to the poets of the works to share my thoughts. I usually give a shout out on social media and write a small note on GoodReads. Sometimes I’ll write something more detailed for my blog or a site. If they have other books or chapbooks out, I do my best to seek out those works as well to notice commonalities and differences between the works.

When I’m working on a new manuscript, I will often run through my head to see who else has done something similar and revisit it, looking at the way they handled a problem or challenge I’m having with my work. The more I read, the better I can write. I just realized I make it sound quite systematic. It’s not really. It’s more of a write a bit, go back, rummage through my shelves to a book or chapbook or individual poem that I know is doing something similar or perhaps ask folks on Facebook.

The cover designed by Carleton Wilson and featuring art by Cate Webb is lovely, a vase decorated with flowers and teardrops (or drops of blood) with a door at its centre overlays the front and back covers surrounded by slivers of moon on each side at the top and waves at the bottom, which evokes, for me a woman’s body.

Cate Webb is a tattoo artist, oil painter and owner of the Black Cat, which is located in Fernwood, Victoria, BC. The spirituality and themes of the occult of her aesthetic in her work and  in particular through the cover art of the book align well with the book.

I don’t feel like artists and cover designers get enough credit for the fine work they do. In fact, it would be a cool subject for a podcast episode. I’ve been a fan of Carleton Wilson’s design for many years. Carleton is also the publisher of Junction Books in Toronto.

Back to Renaissance Normcore!

The title “Renaissance Normcore” feels like the first of many contrasts to be found in the book. Renaissance clothing is doublets and vests, waist cinches and corsets, evocative of an earlier era. Normcore is 21st century unisex clothing, or as High Snobiety reports, “So normcore — essentially a joke that got out of hand — is about embracing the mundane and following the crowd, flying in the face of alternative subcultures and more challenging or bold approaches to fashion.”

The book contains five parts with individual poems in each part and one poem series, “Cardinal Signs Just Wanna Have Fun” in part two.

A poem series also occurs in each part, each title beginning with “I’m in an open relationship with

4. the Fire in My Body That Keeps Me Up at Night

The elements fire, water, air and earth are repeated throughout the book.

It opens with two epigraphs from songs by Jenny Lewis of Rilo Kelly (Silver Lining) and Fiona Apple (Werewolf). The entire book features so many references to music, that it isn’t surprising that Adele created a Spotify playlist of 33 songs. There are 44 poems in the book and many of the songs or the musicians in the playlist are mentioned in the book. Float On by Modest Mouse is on the playlist but with a cover by Misty Mtn and appears in the poem, “Burn It All Down With Water”: I’d like to float on okay/but then I read about the singer from Modest Mouse” (p. 19). A number of the songs on the playlist are covers, such as Bats for Lashes beautiful rendering of Springsteen’s I’m On Fire. where she changes the lyrics from girl to boy, or Aqua’s Barbie Girl redone in a slow rhythm by Tanae with the gorgeous soulful voice of Thana Fayad. Hole, Fiona Apple, Lana del Ray, Lorde  are all on the soundtrack and many of them are mentioned in the book. I had fun going through the book while listening to the soundtrack, I mean playlist! looking for connections. I listen to the soundtrack a lot. One lovely inclusion on the playlist is One Line by Elissa Barclay, who died after a struggle with concussion and PTSD in November, 2019. Elissa was known in Toronto’s indie music community as Warrior Girl. Adele raised money through a gofund me campaign to pay for the production of Elissa’s second album, Tales of an Underground Compassion Clinic.

I’d like to start first by reading the poem “Live Through This” as an homage to Elissa. p. 29

The opening poem of the book and part 1, “You Don’t Have to Choose But You Do”

feels like it sets up the recurring contrasts that appear throughout the book. The poem explores binaries through pop culture, literary references and nature.

Later in the book, the speaker of the poem mentions their “Veronia-Jughead hybridity.”– transformation from one state to another is also prevalent in the book.

solid (permanent) / not solid (either liquid or ethereal or ephemeral):

nesting – a cell with a semi-permeable/membrane inside an organism/inside an ecosystem (Burn It All Down with Water, p. 19)

Transformations from one state to another

References to writing and making poems

Elements of dark or wry humour

Magic and The Occult (astrology, the Tarot)

I’m going to read the first poem which encompasses a lot of the elements I’ve mentioned: You Don’t Have to Choose But You Do (p. 13)

The structure and the repeated imagery of the book is evocative of the Tarot with its opposing card structure.

I could do whole essays on the materiality of the text, the way the weather works in the book to add to/articulate the mood: “autumn knocks a dent/into her depression/that winter packs with ice” How to Enforce Boundaries with Physical Geography -. 17

I could go through the book for its wry humour, a way of dealing with trauma that many of us have, a certain darkness. See Burn It All Down with Water, for example. or The Fish: “if all the queers of East Van/braided their hair together/we’d have to look/sexual tension in the eye”p. 20

I decided to reread If I Were In A Cage, I’d Reach Out For You, Adele’s first poetry collection (Nightwood Editions, 2016) to see if there were commonalities and differences, recurring imagery and themes.

The book also contains five parts with two repeated series throughout the book: Aubade with 4 poems and Dear Sara with 6 poems, which has a continuation in Renaissance Normcore with a seventh poem.

Cage also names specific people and places. Both books give a sense of community, particularly queer community. One of the biggest similarities was the use of opposites, which occurs in both books: “night winces open and light brushes closed” in Aubade I (p. 18), “Sleepwalking I fetch fire out in the rain”

and the contrast between the small and the large is also in both books too. “leashed tigers paraded in to pray/under the great hall’s open lungs” Sara II, p. 27

There are a few specific references to music here too. “Music is architecture, a bridge’s counterweight in the shape/of a horse, the undertow of a harbour pulling a red tide” Aubade II, p. 32

Both books have great and unusual juxtapositions, such as The Gates of Dawn, p. 53 “The city stretches its belly, fills me with wine,/gingersnaps, beetroot, applesauce./Streets steeped in ghost waste and urine/in every water closet.”

If I Were In A Cage I’d Reach Out For You is a feral furry neon film noir earthy collection of desire and melancholy. It’s Coraline at a carnival pulling tarot cards for a wolf in a unicorn costume. It’s darkly sensual. It’s plum sensual. It gave me a craving for pickled herring.

I enjoyed the opportunity to engage with Adele’s poetry and look forward to interviewing her here in Ottawa on the Small Machine Talks, the next time she’s here, possibly at VERSeFest.

I hope you are all taking care of yourselves and your loved ones are safe and healthy too. This is a tough time. I’m glad I have piles of poetry to get me through, and I hope you do too. Thanks for listening.

Thanks to my husband, Charles Earl, for techno wizardry, to Jennifer Pederson for intro and outro musical wizardry.

You can read more about Adele on her site: https://adelebarclay.com/